Who is Edward ian Armchair? 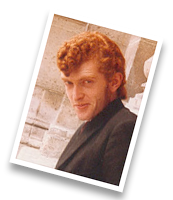 He is someone you have probably never heard of and you probably never will. If you were not a resident of Tamworth in Staffordshire, England between 1977 and 1991, I guarantee you will not have a clue who we are talking about.

Performing since 1980, his words are always better experienced 'live', 'from the horses mouth' as they say, but hopefully this website will offer the next best thing.

Anyway, the point is, Edward ian Armchair is a character that has touched the lives of a certain number of people, and to those people he is rather odd. Rather strange. He's the egg with a double yolk. He's the dog with three legs. He's the lump in your mashed potato.

Let him twiddle your knobs and tickle your fancy.