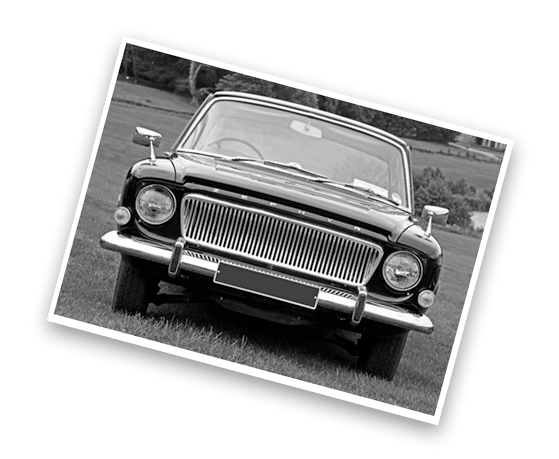 The man in the black Ford Zephyr on the corner of the street can see you coming,
Your stilettoed toes and your high-heel shoes are tapping on the cobbled stones.
He can hear you coming.
That far away echo of feminine footsteps down the road.

Your make-up, made-up face, attracts the disgrace,
of the man in the black Ford Zephyr on the corner of the street.

He crawls along the kerb, your heart beats faster, you’re walking faster.
Take a peek in the car window, see his eyes shining.
The wolf’s eyes pining for your glossy body, the warm skin.
He beckons you in, you run,
Little Red Riding Hood, you run.

Your stilettos slip on the shiny cobbles, you drop your bag.
The things of women fall out.
The cracked perfume bottle, the Tampax and compact.
He smells your scent, your memorable scent.
he’s smelt it so many times.
The odour of your clothes, your powdered nose.

Little Red Riding Hood, the man in the black Ford Zephyr is above you.

Little Red Riding Hood, lies there, the wolf pants, he drools.
The woman in the terraced house on the corner of the street can hear you screaming,
but her eyes are heavy with sleep.
You weep, you weep, your tears fall quickly on the hand squeezing your throat.
He reeks of filth, he smothers you in sweat.

He parts your legs and splits your peace.
You bleed all over the cobbled street.
He pushes and pushes ‘til you scream and scream.
The man in the black Ford Zephyr has satisfied his dream.

Little Red Riding Hood ripped in two, bloody, split, battered and bruised.
That sweet young body, used and abused.
The man in the black Ford Zephyr is driving away.
You crawl along, naked and wet, ripped to shreds.

The man in the black Ford Zephyr is lying in his bed.
He’s moving his hand to the rhythm of the thoughts in his head.

He’s moving his hand to the rhythm of the thoughts in his head.

An attempt to convey in some small way the horror experienced by an innocent victim at the hands of a vicious attacker. I tried to create imagery that summed up the grimy, seedy, dark, lonely frightening world of the stalker, the attacker and the rapist. Quite often films when portraying similar subject matter use a scary menacing vehicle as a symbol of the beast, here we have the black Ford Zephyr. The poem concludes with what I felt summed up the act that had just occurred, the rapist (or the wolf) satisfying himself as he thinks about the evil act he's just performed. Edward